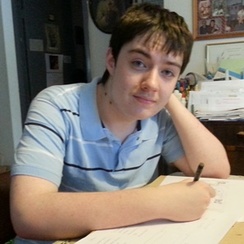 Vincent lives on the Central Coast of NSW, which is a little over an hour's drive north of Sydney.
He has a life-long love of learning and a dedication to finishing projects.

Having completed his Diploma in Graphic Design at the end of 2015,
and his Diploma in Illustrating Children's Books at the beginning of 2017,
he is now continuing the quest to find pathways to earning a living with his creative talents.
On that quest between client generated projects,
he is working on his own projects and self-directed online learning.

That quest has been ongoing since 2011.
​
One of Vincent's greatest strengths is his imagination, and another is his gentle sense of humour.
When he has the opportunity to combine them, something wonderful always results.

He is a member of Illustrators Australia and of SCBWI (Society of Children's Book Writers and Illustrators).

Ink and Colour are the main ingredients in his artwork, which has been becoming more comic in its expression.
At times he uses watercolour or gouache, coloured pencil or digital forms of adding colour.

His 3D illustration work has less obvious humour in it than his 2D illustration work.
​
Whether online or offline, the stories that captivate him contain humour and long story arcs.
Ask him anything about classic British comedy, movies and television series with both plot and humour,
and any of the cinematic universes built upon superhero comics and he becomes a mini Bill Collins.